Iraqi Prime Minister Nouri Maliki hailed the largely peaceful provincial vote.
It was another great success for the young democracy. 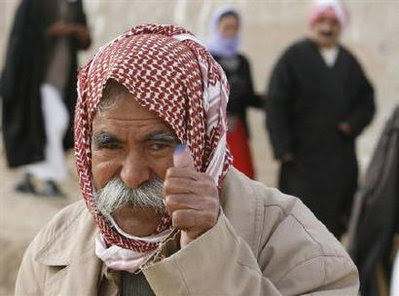 US President Barack Obama has praised Iraq’s provincial elections as an “important step forward” for the future of the country.

“This important step forward should continue the process of Iraqis taking responsibility for their future,” Mr Obama said in a statement after millions of Iraqis went to the polls to elect councils in 14 or Iraq’s 18 provinces.

Security for the country’s first ballot since 2005 was extremely tight, with Iraqi police and military deployed in force, and Mr Obama praised the technical assistance by the United Nations and other organisations to Iraq’s electoral commission, which he said “performed professionally under difficult circumstances.”

Mr Obama said “it is important that the councils get seated, select new governors and begin work on behalf of the Iraqi people who elected them.”

The United States still has 130,000 soldiers serving in Iraq.
The troubled nation has seen a major turnaround due to the Bush Surge in 2007.
Obama did not mention the American military in his statement.

The president’s statement was not posted on the White House website.