Let’s see… How many terrorists have crossed through Syria into Iraq?
And, how many of these same terrorists killed American soldiers stuck in Iraq and innocent civilians?

Kerry attacked President Bush this week before visiting with America’s enemy… Or, maybe Bush is still the enemy.
It’s hard to tell these days. 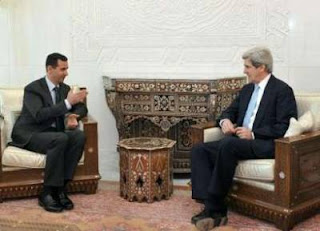 John Kerry attacked President Bush this week prior to his meetings in Damascus.
Breitbart reported, via Power Line:

“But unlike the Bush administration that believed you could simply tell people what to do and walk away and wait for them to do it, we believe we have to engage in a discussion,” Kerry said….

UPDATE: The IAEA announced yesterday that in all likelihood, there was in fact a nuclear reactor on the Syrian site bombed by the Israelis in September of 2007.