So Hot– Top Mullah is busted on camera with a hooker in Iran.

A hidden camera catches an Iranian cleric committing adultery, and the video rockets around the blogosphere, where a new generation can finally skirt state censorship.

A video scandal has hit the Iranian Internet scene. Like many online scandals in the West, it involves a model. Not Paris Hilton, but a supposed model of virtue: a cleric.

In the video—for weeks voted the top story on Balatarin.com (an Iranian version of Digg.com)—a robed cleric is caught on a hidden camera in a private room. He walks to the door to let a chador-clad woman enter.

“Nobody saw you come in, did they?” he asks her lightheartedly. As she removes her chador, he continues in the same tone: “Want to do some Nasnas?”

Iranians know Nasnas as a mythological monster. What the cleric means by “do some Nasnas” is clarified by what happens next in the clip. Americans have a similar expression: the beast with two backs.

The cleric was apparently a member of the government-run Friday Prayers Committee in Hamadan province. Semi-official news sites tried to downplay the impact of the video, which leaked out of an Intelligence Ministry investigation. But their reports did acknowledge that the man involved was a married cleric, and that the video depicts the consummation of an unlawful affair.

“One thing we had never seen before was a cleric’s naked butt,” commented one young Iranian below the online video clip. “Thanks to the Internet, that is no longer impossible!”

Hamadan Province is the same area where a young female doctor was arrested and later murdered for sitting with her fiancee alone in a public park in 2007. 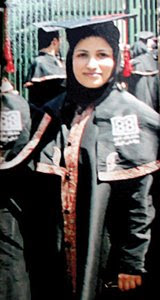 Doctor Zahra Bani Yaghoob arrested by the head quarter of Basig’s Militia at a public park in Hamadan while she was walking with her fiancé. The couple was stopped by the militia and requested to show a legal marriage certificate. For the reason of not having that marriage certificate handy to show, she was arrested and 2 days latter she died suspiciously.
The regime called it a suicide.