Isn’t this kind of sick?
What exactly are these democrats supporting?
…Sex with teen interns? 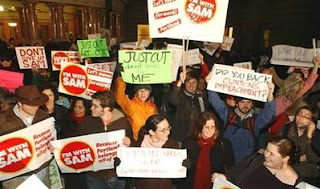 In a surprise move (not), Democratic gay mayor Sam Adams told reporters this weekend that he would not step down after lying about having sex with a teen intern who was 17 when they first met.
Previously, Adams said he was mentoring the boy.
FOX News reported:

PORTLAND, Ore. — The mayor of Portland, Ore., told city commissioners Sunday he will not resign despite calls for him to do so after he admitted he lied and asked a teenager to lie about their sexual relationship.

Mayor Sam Adams publicly apologized this past week for lying early in his campaign about the relationship with an 18-year-old man in 2005.

City Comissioner Randy Leonard told the Associated Press that Adams left him a phone message Sunday morning saying he had decided to remain in office.

Two other commissioners told The Oregonian newspaper that Adams told them so as well.

Adams did not immediately respond to calls from the AP seeking his comment.

Adams met separately with the four city commissioners on Saturday to privately discuss his political future just three weeks after being sworn in.

The scandal has resulted in an investigation by the Oregon attorney general and has divided the city and its gay and lesbian community. But Adams has found strong support to remain, including a Friday rally on his behalf at City Hall that drew more than 400 people.

The teenager, Beau Breedlove, was a legislative intern when he met the mayor at age 17. He and the mayor both say their sexual relationship started after his 18th birthday, in June 2005. 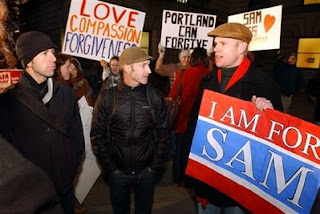