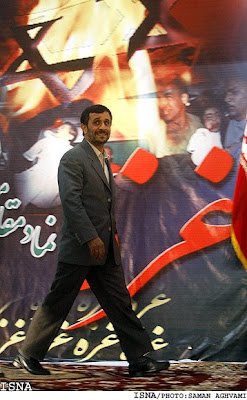 Halleluiah! Earth is saved!
The Obama Administration is drafting a letter to the Iranian regime.
The Guardian reported, via Drudge:

Officials of Barack Obama’s administration have drafted a letter to Iran from the president aimed at unfreezing US-Iranian relations and opening the way for face-to-face talks, the Guardian has learned.

The US state department has been working on drafts of the letter since Obama was elected on 4 November last year. It is in reply to a lengthy letter of congratulations sent by the Iranian president, Mahmoud Ahmadinejad, on 6 November.

Diplomats said Obama’s letter would be a symbolic gesture to mark a change in tone from the hostile one adopted by the Bush administration, which portrayed Iran as part of an “axis of evil”.

It would be intended to allay the ­suspicions of Iran’s leaders and pave the way for Obama to engage them directly, a break with past policy.

State department officials have composed at least three drafts of the letter, which gives assurances that Washington does not want to overthrow the Islamic regime, but merely seeks a change in its behaviour. The letter would be addressed to the Iranian people and sent directly to Iran’s supreme leader, Ayatollah Ali Khamenei, or released as an open letter.

By the way… The Iranian regime called the Holocaust a “big lie” again today.