Samir Kuntar, famous for crushing the skull of a 4 year-old Israeli girl, was honored by Iranian President Mahmoud Ahmadinejad today in Tehran.

Kuntar was released from prison earlier this year in exchange for the remains of two kidnapped and murdered Israeli soldiers. 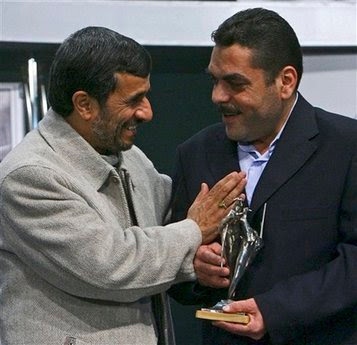 Iranian President Mahmoud Ahmadinejad, left, honors Lebanese Samir Kantar, in Tehran, Iran, Thursday, Jan. 29, 2009, who had been the longest-held Lebanese prisoner in Israel and was released in a prisoner exchange in July 2008. Kantar was a member of the radical Palestine Liberation Front. He was captured while carrying out an attack in northern Israel in 1979. (AP Photo/Mehdi Ghasemi)

Samir Kantar called for the destruction of Israel during his visit with Ahmadinejad today.

Barack Obama wants to hold talks without preconditions with Ahmadinejad and the Iranian regime.