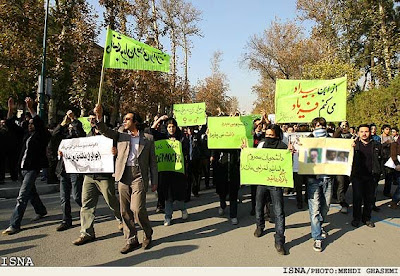 More than 5,000 students marched chanting “Down with dictator”, “Imprisoned students released NOW, we are men and women of struggle, so lets struggle to the end”,” Freedom, Freedom is our right”,”Tank,grenades and the Bassidge forces have no effects any more”. This demonstration was organized in main cities of Iran, Tehran, Hamadan, Shiraz, Arak, Dezfoul,Hormozgan, despite the pre announced curfew by the suppressive RGC. 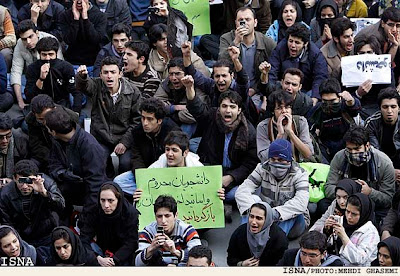 “There was tough control, they [authorities] would not let anyone in but students broke the gate and came in,” OCU member Mehdi Arabshahi told AFP.

“A lot of protests were directed at Ahmadinejad over oppression in universities and the bad economy,” he added. “The protesters also demanded academic freedom and respect for human rights.”

According to him “thousands of students from different universities were there” for the two-hour protest, which started at noon.

National Student Day is observed on December 6 but student sources said they had decided to hold the protest one day late in order to avoid official ceremonies. 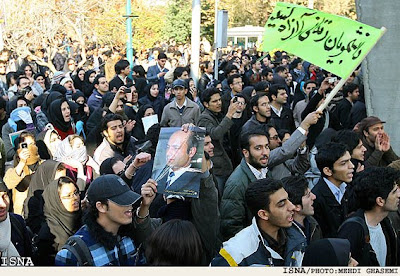 The students rallied at the gates of the Tehran University today. (ISNA)