Those familiar with the case that still remains at the court say his “real” birth certificate authenticated by Snopes and Factcheck actually has 2007 borders and doesn’t list the hospital, doctor or place of birth: 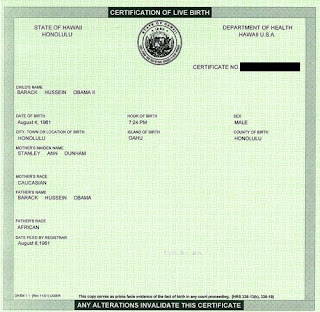 The Supreme Court turned down one Obama eligibility case today.
At least one more remains at the court.
The AP reported:

The Supreme Court has turned down an emergency appeal from a New Jersey man who says President-elect Barack Obama is ineligible to be president because he was a British subject at birth.

The court did not comment on its order Monday rejecting the call by Leo Donofrio of East Brunswick, N.J., to intervene in the presidential election. Donofrio says that since Obama had dual nationality at birth — his mother was American and his Kenyan father at the time was a British subject — he cannot possibly be a “natural born citizen,” one of the requirements the Constitution lists for eligibility to be president.

At least one other appeal over Obama’s citizenship remains at the court. Philip J. Berg of Lafayette Hill, Pa., argues that Obama was born in Kenya, not Hawaii as Obama says and the Hawaii secretary of state has confirmed.

World Net Daily has more on the Supreme Court conference scheduled for this Friday on the other case.