It was a spiritual experience. 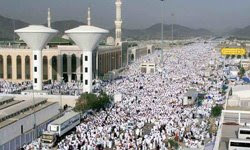 The official Iranian news service was excited to report on the Muslim chanting in the Desert of Arafat.
Fars News reported:

Disavowal of Pagans ritual started in the sacred desert of Arafat on Sunday attended by a huge group of Iranian pilgrims as well as pilgrims from other countries.

“God is Great”, “There is no Deity but Allah”, “Death to Israel”, and “Death to America” were among the slogans chanted by the masses in unison as they gathered in the Desert of Arafat, 20 km (12 miles) from Mecca, for a day of prayer and meditation, the Islamic republic news agency reported.

The faithful – men clad in two-piece seamless white shrouds and women all covered except for their hands and faces to symbolize equality – converged on Arafat by bus and on foot.

Meanwhile… The Leader of the Islamic Revolution Ayatollah Khamenei rejoiced in the defeat of the Republicans in his letter to the Haj pilgrims:

Over the last thirty years, the Middle East and Muslim countries in Asia and Africa have been the arenas where this victorious struggle is taking place: Palestine and the Islamic Intifada and the emergence of a Muslim Palestinian government; Lebanon and the historic victory of Hezbollah and the Islamic resistance against the arrogant bloodthirsty Zionist regime; Iraq and the establishment of a Muslim and populist government on the ruins of the atheist regime and the dictator Saddam; Afghanistan and the humiliating defeat of the Communist occupiers and their puppet government; the defeat and failure of all the plots hatched by arrogant America to dominate the Middle East; the incurable problems and chaos inside the usurper Zionist regime; the prevalence of the Islam-seeking masses in all or most of the neighboring countries and especially among the youth and intellectuals; the amazing scientific and technological progress in Islamic Iran achieved under severe economic sanctions and embargoes; the defeat of warmongers in America in the political and economic arenas and Muslim minorities’ regaining their true identity and dignity in most of the Western countries. These are all clear indications of the triumph and advancements of Islam in its struggle against its enemies in this century that is the 15th century of Lunar Hegira.