The Hardliners protested at the Saudi embassy yesterday: 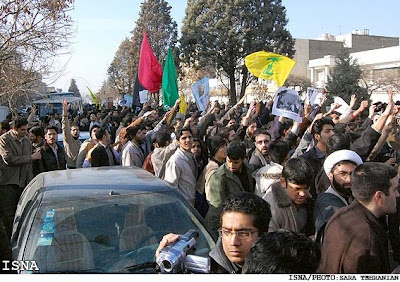 Iranian students protested outside the Jordanian Embassy and staged a demonstration in front of Egyptian interests section in Tehran. (ISNA)

From the Iranian media:

The Jordanian Embassy in Tehran was attacked with explosives, at midnight Tehran time, last night. The Embassy spokesman has confirmed this report. Several Jordanian citizens were inside the embassy during the attack; no one however sustained any injuries. The spokesman also said that he was not certain about the identity of those responsible for the attacks.

It is important to mention that according to Rooz web site, elements of the regime who call themselves the Basiji Students, have via SMS called for the invasion of the Egyptian interest section in Tehran (Egypt has not had an embassy in Tehran since Tehran’s regime praised Khalid Eslamboli, member of the Egytpian Islamic Jihadand murderer of Anwar Sadat).

Yesterday also, the Mash’had branch of the Basiji Students, gathered and took to violently protesting in front of the main gates of the Saudi Arabian consulate, located on Mojallal-Sawjed Boulevard in Mash’had. They chanted slogans against Saudi Arabia, Egypt, Iraq, Jordan. One of the slogans was: “Woe is you, if Khamenei gives me my orders of Jihad” which indicated a call to holy war by the Iranian supreme leader against Saudi Arabia .

They also took to throwing rocks and heavy objects through the windows of the consulate building. They also carried placards that had the words TRAITOR, COWARD and WHORE written on them. According to the Rooz reporter, at 12:30 pm the demonstration reached a fever pitch where protestors began hurling Molotov Cocktails at the building which landed on the other side of the embassy grounds on Molavi Avenue, leading to a massive fire.

The Iranian Students News Agency has more on the protests:

A large number of Iranian students from several universities staged a demonstration in front of Egyptian interests section in Tehran to oppose to the country’s silence over Israel’s attacks against Gaza Strip.

The marchers chanting “death to Israel” criticized some Arab countries’ heads including Saudi Arabian King Abdullah and called for shutting the Egyptian bureau in Tehran.

Elsewhere many other students from the holy Iranian city of Mashhad held a protest rally before Saudi Arabian consulate in the city to denounce Arab leaders submissive stance regarding Israeli offensive against defenseless people of Gaza Strip.

The protestors shouting “death to Israel” condemned Arab countries’ silence over crimes against Palestinians and set fire on Israeli flag.

Iran’s state-run newspaper says a militant group has attacked the office of Saudi Arabia’s state-owned airline in Tehran over a Saudi-backed peace initiative with Israel.

UPDATE– British Students firebombed and stormed the British Embassy tonight.
The students occupied the premises for an hour.