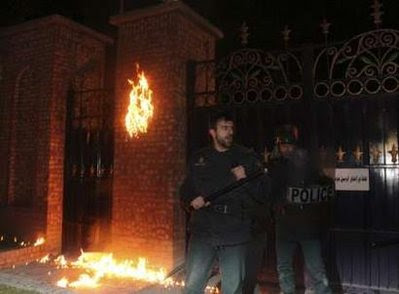 Iranian anti-riot policemen stand guard outside the British embassy in northern Tehran as a petrol bomb explodes during a protest gathering to condemn the Israeli attacks on Gaza, December 30, 2008. (REUTERS/Stringer (IRAN) 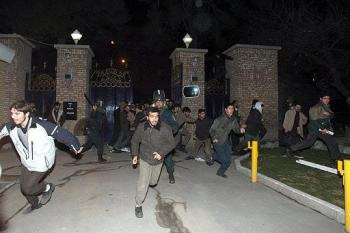 “A large group of people and students entered the Gholhak gardens, which are occupied by the British embassy to protest at Britain’s policies in supporting the Zionist regime and put up the Palestinian flag there,” IRNA said Tuesday.

A media officer at the British embassy in Tehran confirmed the report adding that diplomatic police had driven the demonstrators out.

“We do confirm the raid on our premises. We are in contact with Islamic republic authorities to resolve the matter,” Mitra Behnam told AFP.

The protesters occupied the consulate for over an hour.