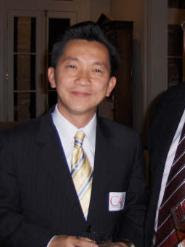 Republicans made an aggressive push to get rid of the 61-year-old incumbent, who has pleaded not guilty to charges of bribery, laundering money and misusing his congressional office.

Cao won a predominantly black and heavily Democratic district that covers most of New Orleans. He will become the first Vietnamese-American in Congress.

He came to the U.S. as a child after the fall of Saigon in 1975. He went on to earn degrees in philosophy, physics and law.

Turnout appeared low in the election delayed because of Hurricane Gustav.