These three stooges would be arrested on sight in Iran if they went out in public with their hair uncovered or if they went for a walk in shorts.
But, they could care less how the women in Iran are really treated. 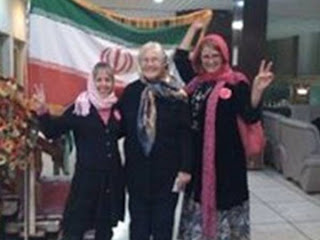 With the Iraq War pretty much over and won the women of Code Pink are now focusing on Iran.
This week the co-founders of Code Pink are traveling in Iran on a “peace” mission.
LT Nixon blogged about this anti-American group’s trip to Tehran and their Iranian friend Rostam Pourzal.
The Code Pink blog also has a report:

What an extraordinary day! After arriving at our hotel in the middle of the night, I woke up early raring to go. Our hotel is in a great location downtown, and I took some time before our meetings to buy some beautiful crafts in the nearby stores and chat with the storeowners. After a hearty Iranian breakfast that included delicious tomatoes, cucumbers, fresh eggs, cheese, yoghurt, flat bread and mouth-watering olives, the “work day” began for the three of us—myself, CODEPINK cofounder Jodie Evans and Col. Ann Wright.

Our first meeting was with our dear friend Rostam Pourzal, who works with the anti-sanctions group CASMI. Rostam used to live in Washington DC, but moved back to Iran recently. Thank goodness he came to greet us, because it turned out that the government person who was supposed to set up our schedule today didn’t show up…

Reflecting on the days’ events, I was struck by how much more open Iran is than I had thought. Yes, we have to wear headscarves and long coats, but that seems so unimportant –although I must say that I feel very claustrophobic covering my head all day. (During lunch at the restaurant, Rostam told me I could take the scarf off, but about 20 minutes later some men came to complain.) I have been comparing the atmosphere here to that of Iraq under Saddam Hussein and here it is very different. People in Iraq were afraid to speak out against Saddam, people in Iran aren’t. We heard criticism of the government while we were still on the plane. Then in customs, when an official asked our guide why we had come to Iran and she replied “trying to make peace,” he laughed and said, “Not with this terrible government of ours.” The taxi drivers complain; western-educated elites complain, businessmen complain.

The Code Pink gals were very active supporters of Barack Obama this year.
Code Pink co-founder Jodie Evans, was one of the top Obama Bundlers this year and raised nearly $100,000 for her candidate. She last met with Obama in June.

Evans also stormed the stage during the Republican National Convention this year. 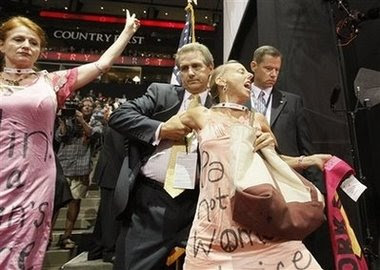 UPDATE: Not every woman was pleased with the Pinko’s trip to Iran.
This was posted in their comment section: 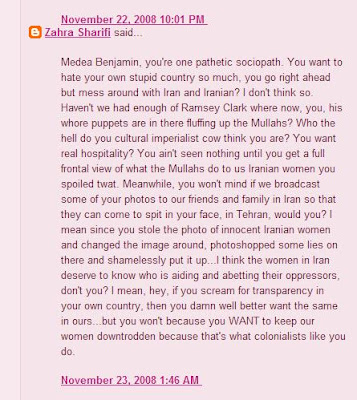