Hope and Change…
According to sources, Trita Parsi who worked for the corrupt Congressman Bob Ney, and is protected by the likes of Zbigniew Brzezinski was said to be advising the Obama Camp on Iran this past year. Trita Parsi is a noted Iranian Regime Sympathizer and president of the National Iranian American Council. The Iranian community is aware of Trita’s close affiliation with Brzezinski as he was Trita’s professor at Johns Hopkins and was one of his ardent supporters and protectors.
Tomorrow Trita will take part in a Congressional briefing. 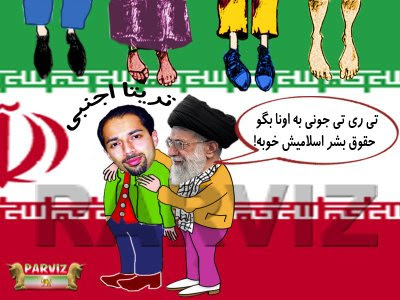 This cartoon is from Iran Press News. In the cartoon Ayatollah Khamenei says to Trita Parsi: “Go tell them that human rights the islamic version is better.”

The Iranian Regime lobby will host a congressional briefing on Tuesday discussing prospects for a new Iranian policy.
The Progressive American-Iranian Committee reported:

On Tuesday, November 18, the National Iranian American Council (NIAC) will host a congressional briefing. Senator Thomas Carper (D-DE) and Representative John Tierney (D-MA) are amongst the speakers. They will be talking about the new president’s policy towards Iran.

It is deeply concerning that a discredited group within the Iranian-American community, with blatantly obvious connections with the Islamic Republic, should be allowed to freely influence Washington’s political circles to the detriment of the American peoples’ and ultimately, the world community’s interests. It is also shocking and difficult to explain that a group labeled by the Iranian regime as the “Iranian lobby” could so easily penetrate the US Congress.

NIAC has been trusted, supported and promoted by the Iranian regime and this is the root cause of its deep discreditability within the Iranian community. Nevertheless, some American interest groups have invariably promoted such organizations to influence the US policies towards Iran. 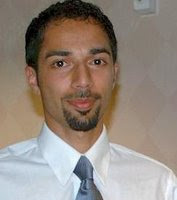 NIAC was founded and grew strong during President Bush’s time in the office. This was mainly due to the disconcerted policies and illusory hopes adopted by his administration for engaging with Tehran which inevitably prepared favorable grounds for the formation of such groups in the first place.

We, the Iranian-Americans believe that only our own mobilization could stop the spread of the Iranian regime’s web of influence in the US. This is the first and most essential step to defend the interests of our community, protect our interests as Americans and defend our compatriots in Iran.

Regarding the contents of this event, once again, the speakers will argue that the time is now rife to engage with the Iranian regime. They will be pushing for all the sanctions to be lifted, and will be arguing that incentives should be augmented. The organizer of the Tuesday event, Trita Parsi, as the moderator and president of NIAC will be trying to persuade the forum what he has been trying to achieve for a long time; that the US should accept the Iranian dominance in the Middle East. In an article in Huffington Post of April 22, 2008 Parsi wrote: “Is the United States ready to share the region with Iran?” Then he emphasized that: “Sooner or later, Iran and the U.S. must learn how to share the region.”

NIAC is very excited about the Obama victory.

Kenneth R. Timmerman at Newsmax has more on tomorrow’s meeting.