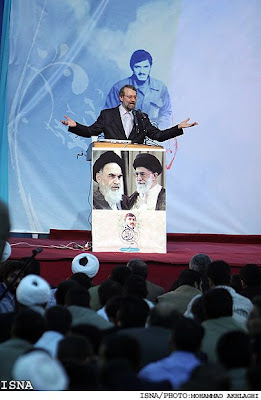 The Speaker of the Islamic Parliament strongly criticized some heads of Islamic countries who recently attended the Conference of Dialogue among Religions in the United States, and said, “Unfortunately, some Arabic countries were the initiators of that conference and they talked to the head of the Zionist regime there.”

“These people (heads of Islamic countries) who raised their cups there to the health of the head of the Zionist regime should beware not to lose consciousness when they get drunken,” Larijani said, the Islamic republic news agency reported.

He reiterated, “The real theme of the story behind organizing that conference was shaking hands with the Zionist regime and preparing for more effective confrontation against Islamic awareness and the late Imam Khomeini’s path, which is a big shame, since they sat at negotiation table with the Zionist regime just in order to establish a new front against Iran!”

Larijani said, “Similar to their defeat at the end of the 33 Day War, they are doomed to face the agony of yet another defeat in conducting this new plot.”

He added, “During the course of the 33 Day War they were covertly taking sides with the Zionist regime, but today they are overtly doing so.”

Larijani said, “These heads of Islamic countries have instead of eliminating their own shortcomings begun falling preys in the trap laid by the Zionist regime.”