About that pistol whipping… 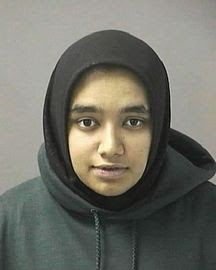 Safia Z. Jilani was indicted for faking an assault. She said a gunman pistol whipped her after she spoke at a diversity rally.

An Elmhurst College student was indicted this week for lying about an assault on campus.
The Daily Herald reported, via ROP:

A DuPage County grand jury indicted a Muslim student at Elmhurst College on suspicion she lied when reporting a masked gunman assaulted her on campus, hours after she spoke at a diversity rally urging tolerance.

Safia Z. Jilani, 19, of Oak Brook is expected to plead not guilty Monday when arraigned on a felony charge of filing a false police report. If convicted, she faces a possible sentence of probation or up to three years in prison.

Prosecutors said Jilani told police her assailant beat her with a pistol about 8:30 p.m. Oct. 9 after she entered a washroom in the Schaible Science Center, where the masked man had scribbled racial slurs on the walls.

One week earlier, she reported finding anti-Muslim slogans and a swastika written inside of her locker. She said the incident prompted her to speak at the Oct. 9 diversity rally, where she read a poem advocating peace and understanding despite the actions against her.

Meanwhile in Mississippi… A 19 year-old man was arrested for sending threatening e-mails with racial overtones to students at several universities.
Dyron Hart, who is black, posed as a white male upset with Barack Obama’s presidential victory.
The Daily Comet reported:

A former Nicholls State University student was arrested by federal agents in Mississippi in connection with threatening electronic messages sent to students at Nicholls and other schools through a popular networking Web site.

Dyron Hart, 19, of Poplarville, Miss., who was arrested Wednesday, allegedly told investigators he wanted to create a “reaction” when he sent Facebook “friends” across three states a message stating he planned to kill 3,000 people, including them, in the wake of Sen. Barack Obama’s presidential victory Nov. 4.

The messages were sent early Nov. 5.

The message recipients, like Hart, are black. But authorities said he gave the impression in the messages, sent under another name, that he was white.

More from Ohio… And, an investigation concluded that the hate crime at Dayton mosque was made up too.