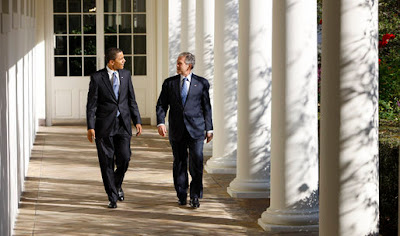 Did President Bush really expect anything less?
This is the same guy who has been trashing him nonstop for 2 straight years after all.
Drudge reported today:

Just hours after President Bush and President-elect Obama met in the Oval Office of the White House, details of their confidential conversation began leaking out to the press, igniting anger from the president, sources claim.

“BUSH AND OBAMA AT ODDS OVER AID FOR AUTO INDUSTRY,” splashed the NEW YORK TIMES in an exclusive Monday evening, quoting “people familiar with the discussion.”

The two met at the White House in private, without staff.

“Bush indicated at the meeting that he might support some aid and a broader economic stimulus package if Obama and congressional Democrats dropped their opposition to a free-trade agreement with Colombia,” claimed the TIMES.

The ASSOCIATED PRESS quickly followed with details of the conversation, citing “aides who described the discussion on grounds of anonymity, citing the private nature of the meeting.”

Bush advisers view the leaks as an effort to undermine the president’s remaining days in office.

“Senator Obama may not be familiar with a long-standing tradition of presidents holding their private conversations, private,” a senior adviser explained to the DRUDGE REPORT.

The AP reported today that Bush is handling the transition of power with grace.
Too bad the same can’t be said for Obama.