Rev. G-D AmeriKKKa Wright was given a standing ovation.
Terrorist Bill Ayers came out to hear him speak. 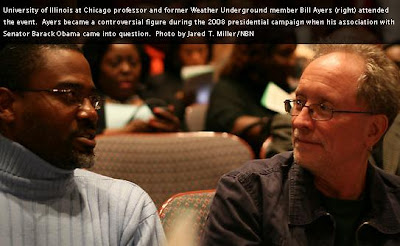 Black students and faculty gave Rev. Jeremiah Wright a standing ovation at the the Cahn Auditorium podium on Friday to deliver his keynote address.
North By Northwestern and The Politico reported:

Rev. Jeremiah Wright had offered the audience nothing more than a slight slouch and the occasional grin, but his very presence was enough to garner him two long, roaring standing ovations by the time he walked up to the Cahn Auditorium podium on Friday to deliver his keynote address.

“FMO unashamedly and unapologetically stands in support of Rev. Wright,” For Members Only Coordinator Zachary Parker had told a loudly cheering crowd. Parker was referring to Northwestern’s decision to rescind their offer of an honorary degree to Wright after his sermons made national headlines because of his ties to presidential candidate Sen. Barack Obama.

…Donning a brown and black African-pattern vest and carrying a black binder to the podium, Wright offered up “just some points of clarification” about the forces that had thrust him into the national spotlight. His “God damn America” sermon? A white professor at Harvard said a similar thing in 1901. The first ever election of a black President? “Incredibly powerful” and “awesomely inspiring.” Unfair treatment from the media? “Ray Charles can see that.”

Bill Ayers came out to hear Wright at the event.