Iranian Leader Mahmoud Ahmadinejad will be at New York next week.
…So will Sarah Palin and thousands of protesters. 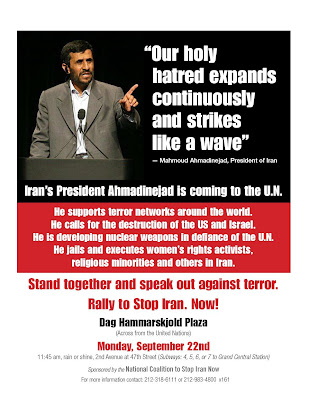 Click to Enlarge
I heard this from an Iranian-American friend earlier…
Governor Sarah Palin will join Hillary Clinton at the United Nations on Monday for a massive anti-Ahmadinejad rally sponsored by the Conference of Presidents of Major American Jewish Organizations.
Tonight JTA posted the announcement:

Sarah Palin will speak at next week’s Jewish-sponsored rally to protest Mahmoud Ahmadinejad at the United Nations.

In addition to Palin, the Republican vice-presidential nominee and Alaska governor, confirmed speakers include U.S. Sen. Hillary Rodham Clinton (D-N.Y.), an Iranian dissident, a black minister and Jewish and Israeli leaders, according to a key group organizing the rally, the Conference of Presidents of Major American Jewish Organizations.

Asked if there would be someone from the Obama campaign at the demonstration, Hoenlein noted the presence of Clinton as a leading Democrat and said she accepted the invitation to speak several weeks ago, before the Democratic National Convention. 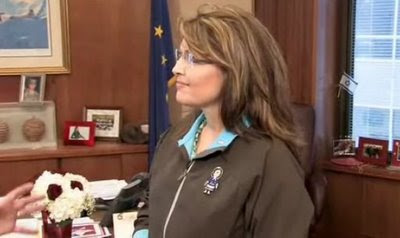 Governor Palin keeps an Israeli flag in her office. It was given to her by close friends who traveled to Israel.

UPDATE: Hillary bails– won’t attend the pro-Israel event.
She did not want to be seen on a stage with Sarah Palin, via the AP:

Clinton aides were furious. They first learned of the plan to have both Clinton and Palin appear when informed by reporters.

“Her attendance was news to us, and this was never billed to us as a partisan political event,” said Clinton spokesman Philippe Reines. “Sen. Clinton will therefore not be attending.”
A McCain-Palin campaign official, speaking on condition of anonymity because Palin’s schedule for Monday has not been announced, said only that Palin tentatively planned to attend the rally.

So,Hillary says it would be too partisan having both appear at the rally?
That’s unfortunate.