Once Lost Anbar Province Is Turned Over To the Iraqi Government

This makes 11 of 18 Iraqi Provinces now under Iraqi governmental control.
–One in four Americans lost in Iraq were killed in Anbar Province. 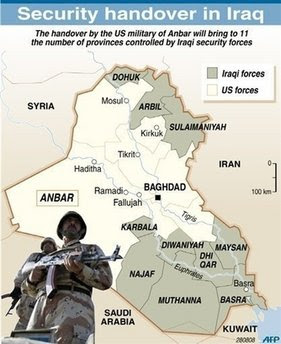 Map of Iraq showing provinces transferred from US to Iraqi control. Iraqi forces have taken over control of Anbar, once the most explosive battlefield in Iraq, from the US military, symbolising the growing security gains in the war-torn country.
(AFP/Graphic/Gil)

The US military has handed Anbar province, once the centre of Iraq’s Sunni insurgency, to Iraqi control at a ceremony in the provincial capital.

Anbar province began a transformation in 2006 as former insurgents turned against al-Qaeda and became US allies.

More than a quarter of all US soldiers killed in Iraq have died in Anbar, which is Iraq’s biggest province.

With Anbar’s transfer Iraqi forces will control security in 11 of the country’s 18 provinces.

The government headquarters in Ramadi was draped with tribal flags for the handover ceremony, which was presided over by US, Iraqi and tribal officials.

Aswat Aliraq has more on the handover.

This is a good day to replay this famous line by Democratic Leader Harry Reid:

Thank the Lord we didn’t listen to loser Reid.