Republican Delegates were spat on and sprayed with poison today as they arrived at the RNC convention at the Xcel Center.
The protesters were able to get into the area unopposed.

One 80 year old delegate had to be hospitalized from the violence by the Leftists. 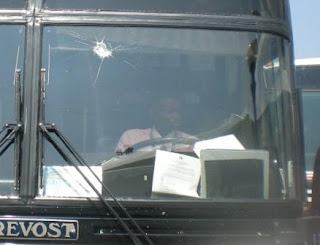 The Alabama delegation was one of the busses that was attacked today in Minnesota.

The Leftist, anarchist, Obama-supporting radicals attacked RNC delegates today at the Xcel Center and sprayed them with a toxic substance.
An 80 year old RNC delegate had to be hospitalized!!
MyFOX Twin Cities reported:

As the Connecticut delegation was getting off a bus near the Xcel Center, a group of protesters broke free from authorities and attacked the delegates.

Connecticut delegate Rob Simmons told FOX 9 that a group of protesters came toward his delegation and tried to rip the credentials off their necks and sprayed them with a toxic substance.

The unknown substance burned their eyes and stained their clothes.

One 80-year-old member of the delegation had to be treated for injuries, and several other delegates had to rinse their eyes and clothing.

The Everyday Republican has a report on the monstrous attacks on the elderly delegates.
One of the victims was an elderly woman who was spat on.

The Pioneer Press wrote about more attacks on Republican delegates:

Protesters harassed two state delegations in St. Paul to attend the Republican National Convention Monday. Someone threw a rock through the window as delegates from Alabama rode their bus to the Xcel Energy Center, where RNC events took place. And masked protesters confronted and harassed the Connecticut delegation — several of them were spat upon, roughed up and doused with a mixture of water and bleach.

Heath Fahle, director of the Connecticut Republicans, said the incident happened on Kellogg Boulevard about 2 p.m.

“It was frightening,” said Fahle.

He said the delegation of more than 100 got off their chartered buses near the Xcel Energy Center. As they walked on the sidewalk, a group of masked protestors chanting anti-war slogans appeared in front of them.

They linked arms, attempting to create a human barricade. As police on horseback arrived, Fahle and other members of the group tried to push through.

Most of them escaped unscathed, but the protesters splattered the last group of delegates with the liquid.

“Two got doused, and several more got sprayed with it,” said Fahle. Former U.S. Congressman Rob Simmons was hit on the face with the liquid.

Washington State’s delegation was also attacked today when Leftists threw cement bags and sandbags from the overpass onto the busses traveling down the interstate.
The cement bag attacks were not picked up by the local or national news.