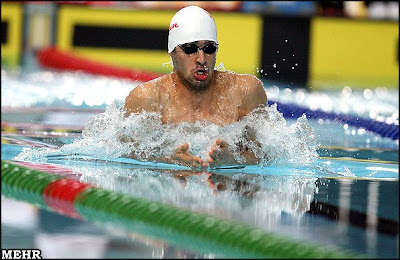 Mohammad Alirezaei was the first Iranian swimmer ever to qualify for the Olympic Games. But, minutes before his race today the regime in Iran pulled him rather than see him lose to an Israeli swimmer.
The Jerusalem Post reported:

Mohammad Alirezaei was due to race against Be’eri in the fourth heat of the 100 meter breaststroke, but pulled out, apparently under the orders of the chiefs of the Iranian delegation.

“This isn’t the first time this has happened and it doesn’t surprise me anymore,” Olympic Committee of Israel General Secretary Efraim Zinger told The Jerusalem Post. “Politics takes precedence over sport with the Iranians and the Olympic spirit is as far from them as east is far from west.

“My heart goes out to the Iranian athletes. In the Athens Olympics one of their sportsmen, who was a gold medal favorite, had to pull out because he was drawn against an Israeli.

Iranian media has a different story.
Mehr News reported that Alirezaei was sick and had to be hospitalized:

Iranian swimmer Mohammad Alirezaei has pulled out of the Olympic Games on Saturday because of illness.

The 100-meter breaststroke swimmer was carried to a hospital in Beijing, according to the Iranian Swimming Federation officials.

Alirezaei swam 100-meter breaststroke with a time of 1:03:3 minutes last month in Dubrovnik, Croatia, and advanced to the 2008 Beijing Olympic Games.

Alirezaei is the first Iranian swimmer to book an Olympic place.

In other Iranian Olympic news…

The mullahs are upset that a woman, Homa Hosseini, carried the Iranian flag into the stadium at opening ceremonies.