Meltdown…
She violated a restraining order and blew off her court appearance…
Now the cops are looking for Deb Frisch. 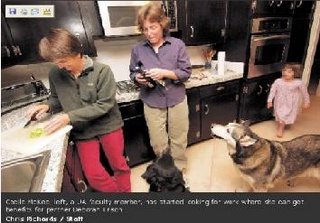 Frisch (on right – not the child) is wanted by the authorities.
Sadly this was a slow motion train wreck.

Dr. Frisch has removed her website, but many of her posts and comments can still be found on Technorati and Google.

After the Frisch-Goldstein drama, Frisch was charged in Oregon with stalking and telephone harassment in a matter unrelated to Goldstein.

Meanwhile, Goldstein obtained a restraining order against Frisch in Denver. Alleging she violated the order, he then obtained a contempt citation against her. When she didn’t appear last week to show cause why she shouldn’t be held in contempt of court, the matter was continued until today.

At the court hearing in Denver this morning, Frisch again didn’t show, although her lawyer did. Despite his efforts on her behalf, the Judge ordered the arrest warrant to be activated. (No links, but I did attend the brief hearing.)

Here Deb impersonates a US soldier…

Click to Enlarge
More on the above depraved episode of derangement at Angry in the Great White North.

Blog PI has kept up with this story.
This is a very disturbed Leftist.
Michelle Malkin… “crackpots must face consequences, too.”