And, a few years of backing terrorist attacks on Iraqi markets and children’s soccer fields can even get you a gig as American foreign policy consultants.
Who said terrorism does not have its perks?

With the much anticipated release of the Iraq Study Group Report we can all sleep soundly at night knowing that American Foreign Policy has now been placed in enemy hands.

Doesn’t it make you feel all warm and fuzzy inside knowing that the Syrian Ambassador is consulting America on foreign policy?
The New York Times reported in November:

WASHINGTON, Nov. 17: James A. Baker III, the former secretary of state who is now Republican co-chairman of a bipartisan group examining strategic options in Iraq, has met several times with Syrian officials to discuss how they might cooperate with the United States, the Syrian ambassador here said Friday.

“What would it take Syria to help on Iraq?” the Syrian ambassador, Imad Moustapha, recalled Mr. Baker asking Syria’s foreign minister, Walid Muallem, during a meeting in New York at the Waldorf-Astoria in September. Mr. Moustapha described the session as “very promising.”

During a 45-minute interview at the Syrian Embassy on Friday morning, the ambassador said he arranged the New York meeting, also attended by other members of the bipartisan Iraq Study Group, at Mr. Baker’s request. Separately, Ambassador Moustapha met twice with the study group in Washington.

The ambassador would not provide specifics, but said he had told the study group in detail what actual things we can do, and what are the things that we cannot do. We were very candid with each other. We explained to them why it is in our own national interest to try to help stabilize the situation in Iraq.” 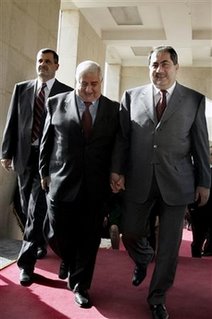 On November 19, 2006- Syrian Foreign Minister Walid Muallem called for a timetable for the withdrawal of foreign troops from Iraq, as the authorities announced that the suicide car bomber who killed 22 workers was a Syrian.
Because as everyone knows…
Once America leaves the region Syria will become an evil but friendly regime.

Better yet… How about this consultant on American foreign policy?

In case you missed him at Columbia university on Wednesday night, HotAir has a video clip from his deranged lecture. 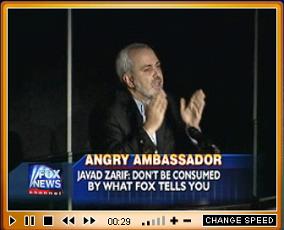 Javad is a big fan of the Hezbollah terrorist organization, Iran’s outreach program in Lebanon:

Javad Zarif: Hezbollah is the most popular movement not only in Lebanon but in the Arab World.

Javad also said during his speech in New York that Palestinians are suffering today because of “atrocities” that happened in World War II, specifically against the Jews. Iranian President Mahmoud Ahmadinejad has repeatedly denied that the Holocaust happened and has also called for the destruction of Israel.

When asked whether he believed six million Jews died in the Holocaust, Zarif answered, “I believe a great atrocity was committed in the Second World War. The question that needs to be asked is what crime was committed by Palestinians in that atrocity?”

His contributions to the Iraq Study Group were obviously invaluable.