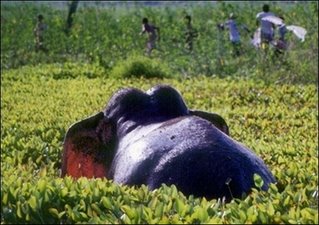 Indian villagers run away from a wild elephant who strayed into a marsh close to Guwahati in 2000. Four people have been trampled to death by wild elephants in India’s northeastern state of Assam in the latest in a series of attacks on humans.(AFP/File)

The elephant named after terrorist mastermind Osama bin Laden has trampled 14 people to death in India.
The BBC reports:

Rangers in India’s Assam state have issued a shoot-on-sight order on a killer rogue elephant named after al-Qaeda leader Osama Bin Laden.
Laden has trampled 14 people to death in the past six months in the north-eastern state, officials say.

The order came after the rogue bull killed a woman on Wednesday. So far he has eluded hunters.

Humans and elephants have come into greater conflict in recent years as man encroaches on jungle territories.

So far Osama is untraceable.