It’s Friday… Time for a good sermon on the destruction of Israel. 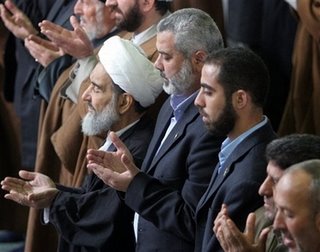 Palestinian Prime Minister Ismail Haniyeh, center, prays during the Friday prayers, at the Tehran University campus, in Tehran, Iran, Friday, Dec. 8, 2006. Haniyeh vowed on Friday that his Hamas-led government will never recognize Israel and will continue to fight for the liberation of Jerusalem. (AP Photo/Vahid Salemi)

Maybe, Israel should just sit and talk with these leaders in Iran.
Certainly, they can come to some understanding.

Iran’s Vice-President Parviz Davoudi has said Palestinian nation’s victory against the Zionist regime of Israel is definite according to divine promises.

Davoudi said in a meeting with Palestinian prime minister Ismail Haniyeh here that Muslims and all free and independent people in the world support palestinian government — due to its right stances– and Palestinians’ unprecedented resistance against Zionist usurpers and their allies.

He said that defending Palestine means safeguarding Islam, adding that enemies of freedom and humanity are doomed to failure and lofty aspirations of Palestine would be materialized thanks to resistance of young Palestinians.

Referring to all-out support of Iranian nation and government for the Palestinian nation’s resistance, Davoudi announced Iran’s readiness to put its valuable achievements and experiences in the political and urban development sectors at the disposal of Palestinians.

Haniyeh for his part touched on the sanctions imposed on the Palestinian government by the Zionist regime and its US-led allies in a bid to gain diplomatic advantages and provide security arms for the artificial regime of Israel.

He said that popular Palestinian government doesn’t recognize the occupiers’ legitimacy and regards resistance of Palestinian nation against Zionists as their natural right.

Haniyeh also said that Hamas would never, ever recognise Israel.