Before enjoying the opening ceremonies at the Asian Games, Iranian President Mahmoud Ahmadinejad (R) and Palestinian Prime Minister Ismail Haniyeh got together for some friendly chat… Oh, and re-committed to the total destruction of Israel. 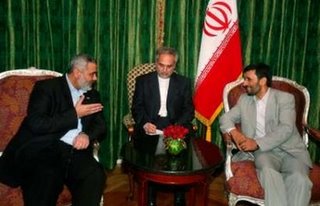 Iranian President Mahmoud Ahmadinejad and Palestinian Prime Minister Ismail Haniyah held talks at the Asian Games in Doha on Friday.
And, of course, the destruction of Israel was tops on the list of topics:

According to the Media Department of the Presidential Office, President Ahmadinejad, in the meeting, said: “As everybody knows, the Zionist regime was created to establish dominion of arrogant states over the region and to enable the enemy to penetrate the heart Muslim land.”

Saying the Israeli regime was inherently a “threat,” he said it was established in the region to create tensions and impose the arrogant policies of the US and UK on regional states.

“Under no circumstances can it contribute to peace and security.” Premier Haniyah, for his part, praised the support of the Iranian government and nation for the cause of the Palestinian nation, saying “the Iranian nation’s brilliant stand in the rightful battles of the Palestinians encourages them and signifies their deep understanding of Islamic principles.”

“The Intifada (uprising) of the Palestinian nation will continue until the cause of the Palestines is materialized and Al-Qods Al-Sharif is liberated,” he added.

Referring to the decline of the Zionist regime and success of the freedom struggle of the Palestinians, President Ahmadinejad said: “Today scores of Western politicians are in doubt as to the future of this illegitimate regime and its existence has come under question.”

He further said that it is the religious duty of all Muslims to support the Palestinian nation.

“The continued commission of crimes by the Zionist regime will speed up the collapse of this fictitious regime.”

It’s refreshing that at least one democratic politician understands that, “Talking to Iran and Syria is like the local fire department asking arsonists to help.”