Coming off of last week’s Holocaust Conference and death threats to Israel, Mahmoud Adinajenad waisted no time in calling for a revival of the Islamic Ummah and shared nuclear technology among the Arab states this weekend.
Fars News reported:

Speaking in a meeting with the Malaysian Minister of Science and Technology Jamaludin Jarjis here on Sunday, Ahmadinejad laid emphasis on the outstanding role and responsibility of the two countries in the progress and advancement of the Islamic Ummah (nation).

“The radiant era of Islamic Civilization will be revived to respond to man’s unanswered needs and to satiate the world’s thirst for welfare,” he reiterated. 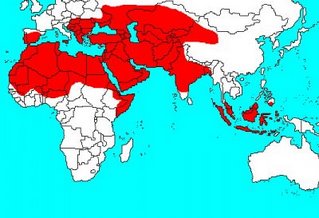 The Islamic Caliphate (via Get Religion)

Also this weekend…
Ahmadinejad says Iran will share its nuke technology with its all of its Arab neighbors:

“The Islamic Republic of Iran is prepared to transfer to regional states its valuable experience and achievements in the field of peaceful nuclear technology as a clean energy source and as a replacement for oil,” the state quoted Ahmadinejad as telling senior Kuwaiti officials.