So much for fresh Danish,… Excuse me, “Roses of the Prophet Muhammad”…
700 Iranian bakers protested against the brutal regime this weekend! 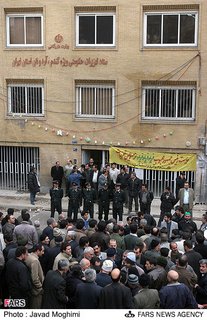 Winston reports that 700 bakers took to the streets of the capital this weekend in Tehran. They were angry about the regime controls on flour, wheat and other necessary baking supplies.

The baker’s rally in Tehran followed the violent student protests against Ahmadinejad earlier in the week.

But now there are reports that the brave Iranian students who shouted down Ahmadinejad and chased him from campus have gone into hiding. It is typical of the Iranian regime to go after participants after a protest. 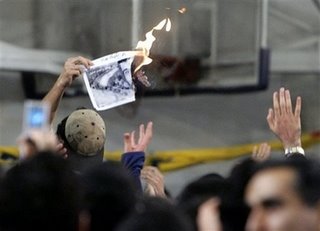 The Guardian reported this news today:

Iranian student activists who staged an angry protest against President Mahmoud Ahmadinejad last week have gone into hiding in fear for their lives after his supporters threatened them with revenge.

One student fled after being photographed holding a banner reading, “Fascist president, the polytechnic is not for you”, during Mr Ahmadinejad’s visit to Tehran’s Amir Kabir university. At least three others have gone underground after being seen burning his picture. Vigilantes from the militant Ansar-e Hezbollah group have been searching for them.

Last Monday’s university demonstration triggered violent clashes between student activists and crowds of Basij militia, who were there to support the president. A shoe was thrown at Mr Ahmadinejad while a student had his nose broken by an aide to a cabinet minister…

Protesters later surrounded the president’s car, prompting a security guard to fire a stun grenade to warn them off. Four cars in the presidential convoy collided in their haste to leave. Mr Ahmadinejad’s staff later insisted he had remained calm and ordered that the students should go unpunished. But some of those present say he accused them of being paid United States agents who would be confronted.

“He threatened us directly, saying that what we were doing was against the wishes of the nation,” said Babak Zamanian, a spokesman for Amir Kabir university’s Islamic students’ committee. “After that, the students protested even more sharply, calling him a lying religious dictator and shouting, ‘Forget America and start thinking about us!’

After the unruly protest against Ahmadinejad on Monday, Tahkim Vahdat, the main student movement in Iran, issued a “storm warning” to the regime!

Captain’s Quarters and HotAir have more on the students in hiding.