After the unruly protest against Ahmadinejad on Monday, Tahkim Vahdat, the main student movement in Iran, is issuing a “storm warning” to the regime! 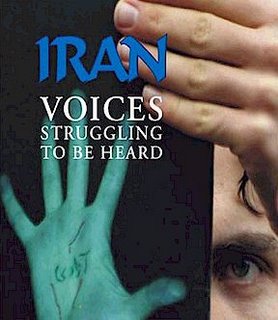 AKI Kronos and Iran News (picture above) are reporting that there’s trouble brewing at home for Ahmadinejad and the mullahs:

“Whoever sows wind, will reap a tempest” ran the concluding line of a statement published in Tehran on Wednesday by the Tahkim Vahdat, the main student movement in Iran. Monday’s incident, where hardline president Mahmoud Ahmadinejad was heckled by students at the controversial Holocaust denial conference, “shows that the universities are alive and do not intend to stay silent at the ruin of the country,” Vahdat’s leaders said.

Dozens of protesters burned pictures of Iranian president Mahmoud Ahmadinejad crying ‘dictator go away’, ‘death to dictatorship’ and threw firecrackers on Monday forcing him to interrupt several times a speech he was giving at the Amir Kabir university in Tehran and leave before scheduled. A thousand students had also protested on Sunday at the university asking the president not to come the following day.

The students were protesting against “the shameful conference on the Holocaust which has brought to our country Nazis and racists from around the world and the fact that many activists with students’ movements have not been allowed to attend university,” said Mehdi Hatefi, an activist with Tahkim Vahdat on Monday.

It was the first time since his landslide victory in June 2005 that Ahmadinejad was challenged in public.

“The shouts of the students when they found themselves face to face with the head of the government wanted to underline the extension of repression here and the incapacity of this government for the benefit of the country, as well as rampant corruption and a disastrous economic situation that have characterised Iran for the 155 months of his rule,” the Tahkim Vahdat statement read.

There are also reports that the student groups are now united against the regime and its oppressive policies.
Open Democracy reported:

On 6 December, despite the government’s extraordinary crackdown, an extraordinary crowd of students participating in an event called “university is alive” broke down the gates of and demonstrated inside the main campus of Tehran University. One slogan chanted was “nothing to lose but our chains”; others called for the resignation of the education minister and sang “students, workers, unity, unity”, “free political prisoners”, “death to dictators”, “we want bread, not bombs”. There were many gatherings at other universities: Tehran’s Amir Kabir, Mazandaran (Babolsar), Mashad, Tabriz (Sahand) and Hamedan. 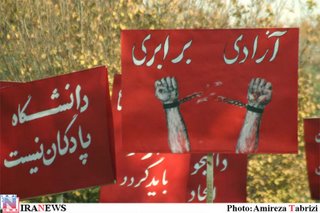 The timing was significant: a day before the anniversary of 7 December 1953, which saw the shooting of three students by the Shah’s soldiers after the coup backed by the US and Britain that toppled the democratically elected government of Mohammed Mossadegh. Since the 1979 revolution, students have marked this day across Iran.

In recent years, the Tahkim Vahdat has not been given permits for such gatherings; instead, a government-backed militant basij group has been granted permission to demonstrate in the same location in Tehran and on the same day, with well-known hardline figures as speakers. There are no reports of the basij rally taking place this year; the main student demonstration won the day.

It seems too that student groups, from pro-democracy Islamists to socialists, united in non-partisan slogans. They do not appear to have leading figureheads who can be silenced and imprisoned or exiled, or leaders who can betray them or lead them astray. It is the members of such groups, part of Iran’s educated baby-boom generation, who will ultimately determine the country’s future.