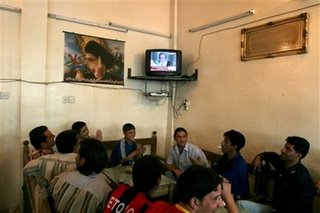 Iraqis applaud as one of Saddam’s lawyers, former U.S. Attorney General Ramsey Clark, seen on the screen is ejected from the courtroom after handing the judge a memorandum in which he called the Saddam trial a travesty during sentencing session to former leader Saddam Hussein. (AP)

They had to drag Bush-hating democrat Ramsey Clark from court today as Iraqis cheered.
Reuters has details:

BAGHDAD, Nov 5 (Reuters) – The judge presiding over the trial of Saddam Hussein and seven others on charges of crimes against humanity ejected former U.S. attorney general Ramsey Clark from the court on Sunday for insulting the tribunal.

Clark, who heads an international team of lawyers involved in the defence, was ejected at the start of a hearing at which Saddam and two aides were convicted and sentenced to death.

The judge, Raouf Abdul Rahman, ejected Clark because he had sent a memo to Abdul Rahman including the accusation that the tribunal was making “a mockery of justice”.

The judge told him in Arabic: “No, you are the mockery … get him out, out.”

Abdul Rahman then shouted in English: “Out! Out!”

“You come from America and ridicule the Iraqi people,” he said.

Poor Ramsey doesn’t earn any brownie points for defending the Butcher of Baghdad. 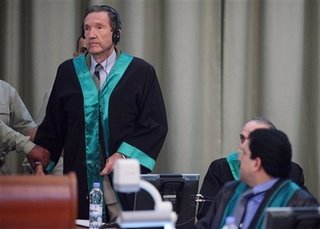 Former U.S Attorney General and Saddam Hussein’s defense attorney Ramsey Clark, left, is ejected from the trial of Iraqi President Saddam Hussein in Baghdad’s heavily fortified Green Zone, Sunday Nov. 5, 2006. Before the trial began, one of Saddam’s lawyers, former U.S. Attorney General Ramsey Clark, was ejected from the courtroom after handing the judge a memorandum in which he called the Saddam trial a ‘travesty.’ Abdul-Rahman pointed to Clark and said in English, ‘Get out.’ Iraq’s High Tribunal on Sunday found Saddam Hussein guilty of crimes against humanity and sentence him to die by hanging. (AP Photo/Scott Nelson, Pool)

Earlier in the press conference after the verdict, Iraqi officials said they will take further action against Ramsey Clark.