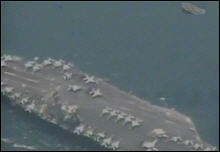 Iran released footage taken from a spy plane of a US Carrier in the Gulf today on Al-Alam television.
Drudge and Breitbart reported:

The brief minute-long film, which was shown on Al-Alam television’s evening news bulletin, showed wobbly aerial footage of an aircraft carrier stacked with war planes as it sailed.

The television’s anchor said the film, the property of Iran’s elite Revolutionary Guard, showed a vessel from “the US fleet in the Persian Gulf”.

“A source in the Revolutionary Guard said the drone carried out its mission without US fighter pilots reaching it,” the television said.

It said there were 10 such films taken by the drone which showed “more precise information and details about military equipment, foreign forces, and their activities in the Persian Gulf.”

The station did not name the vessel nor did it say when the footage was shot.

The broadcast comes near the end of Iran’s latest 10-day war games, “Great Prophet II”, which military chiefs have said were aimed at showing off Iran’s defensive prowess and testing new military hardware. 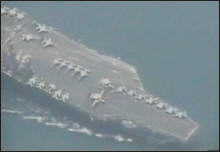 More footage of the US Carrier from the Iranian broadcast. 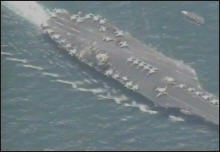 More footage from the broadcast on Iranian TV.