Meanwhile… the Communists are backing the Republican Party!

Kidding… They’re joining lockstep with their democratic comrades to defeat the evil capitalists. 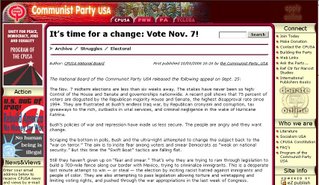 World Net Daily notes the desperation of the communists to get out the vote:

“The Nov. 7 midterm elections are less than six weeks away. The stakes have never been so high: Control of the House and Senate and governorships nationwide. A recent poll shows that 75 percent of voters are disgusted by the Republican majority House and Senate, the highest disapproval rate since 1994. They are frustrated at Bush’s endless Iraq war, by Republican cronyism and corruption, tax giveaways to the rich, cutbacks in vital services, and criminal negligence in the wake of Hurricane Katrina.”
A last-minute pitch by the Democratic National Committee for a sweep in tomorrow’s midterm congressional elections?

Republicans agree… The stakes have never been so high.