There was a mass protest today against the ETA Separatists in Seville!

Toasted Bread is reporting on the mass protest in Seville today against the terror organization ETA who “wants nothing less than independence and their socialist plan.” 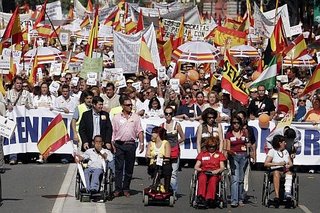 The Zapatero Government earlier in the week announced that it was going to control the noise of the protesters. 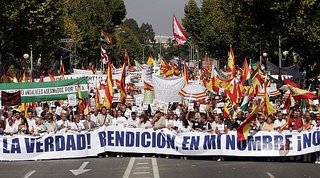 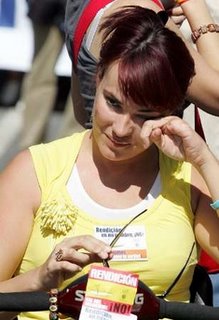 Irene Villa, who lost both her legs and part of her hand in an ETA attack when she was 12, gestures during a demonstration in the southern Spanish town of Seville October 1, 2006. (Reuters) 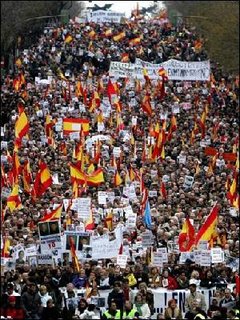 The mass protest passed without incident.
The BBC did not report on this protest as of Sunday evening.

* * * * *
And, the latest Hugo Chavez links to terror…
Toasted Bread sends this on Hugo Chavez’s links to the ETA terrorists:

This same week we have also known that Chávez has employed Arturo Cubillas, ex-ETA terrorist, allegedly accused of 3 murders in Spain, and his wife. He has been named Director assigned to the Office of Administration and Services of the Agricultural and Lands of Venezuela Minister. His wife has been named General Director of the Venezuelan Presidency, as Spanish Embassy in Venezuela has confirmed. Links above are in Spanish, but are very interesting to know who this man was. In brief, he was one of the ETA-Terrorists looked for by Spanish police in the 80’s -where ETA’s bloody campaign was more active-, deported from Venezuela to Algeria, where talks between Socialist Government and ETA failed. 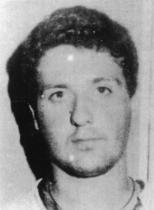 Arturo Cubillas in a picture from 1984 is wanted by the Spanish police for his involvement in 3 murders. (ABC.es)

El Universal has more on the latest member of the Chavez administration:

Cubillas (48) is one of the 11 ETA members who were taken in May 1989 from Algiers to Venezuela -following unsuccesful talks between ETA and the Spanish Government. He is wanted by the Spanish police in connection with three murders.

Last week the ETA announced that depite the policies of the Zapatero government, the terror group would not lay down their arms.

Fausta has the latest on Chavez and his campaigning for a place on the UN Security Council.