“Women are speaking highly of themselves and that causes men who sacrifice their lives in this sport disappointment. Women are not champions in this sport, they are only participants. If they observed Islamic regulations more they would not have such problems.”

Or Does It Explode has word that racecar winner Laleh Seddigh was kicked off the track and won’t be repeating her win as the Iranian national car rally champion. 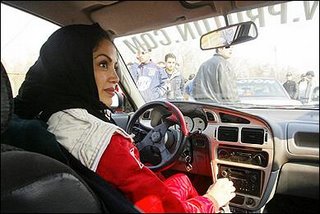 After her previous win as the Iranian national car rally champion, the regime eliminated the podium… It was quite shameful. 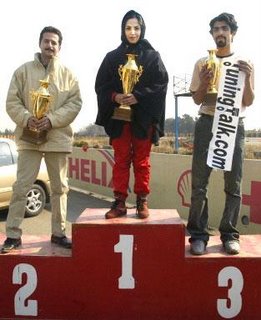 The men decided they did not like standing beneath a woman so rather than improve, they eliminated her.
The Guardian has the latest on Laleh Seddigh’s stalled efforts:

The snub followed days of wrangling with Iran’s racing federation over her right to take part in an event she won two years ago on her way to becoming national champion. In the lead-up to the race, she was told her participation was not guaranteed but was advised to register her name. Her registration was passed after technicians gave her car the all-clear.
“I thought I had been given the go-ahead,” she said. “I was walking towards the grid thinking, thank God this has been resolved, when they shut the door on me. They said they didn’t know why, but the head of the federation said I wasn’t allowed to participate.”

It was the first time Seddigh, whose exploits earned her the soubriquet “the little Schumacher”, had been excluded from a contest. Senior federation officials said they had been unable to obtain permission for her participation.

However, Seddigh believes she was banned to prevent her earning enough points to repeat her championship success, which won her international fame but upset Iran’s male-dominated religious ruling establishment. 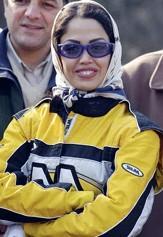 Or Does It Explode offers this advice:

If we were Hollywood producers, we’d think about securing the film rights to Laleh’s story and roping in Angelina Jolie to play the lead.