Iraqi American Haider Ajina sends information on the arrest of the moderate Shiite Ayatollah, Sayyid Hossein Kazemeini Boroujerdi, in Tehran this past weekend.

Open Democracy wrote about the defiant Ayatollahs persecution this week:

Kazemeini Boroujerdi first took a public stance against the ruling clerics in 1994. Until then he had kept his defiance private. But as he witnessed the loss of respect for religion – caused both by worsening economic and social conditions and the pervasive institutional and financial corruption that benefited senior officials and their relatives – he decided to act. It happened when – as he led the celebration prayers to mark the end of the holy month of Ramadan, and in the tradition of the eighth Shi’a imam, imam Reza – he dressed himself in a white shroud and carried a sword as a sign of protest against the injustice of the clerics in power.

The problems that he identified then have persisted. Despite hundreds of billions of dollars in oil revenue, the per-capita income of Iranians today is 30% less than in 1978 – the year preceding the revolution. Unemployment is high and inflation rampant. According to Jahangir Amuzegar, the distinguished Iranian economist and former member of the International Monetary Fund’s executive board, the list of nationwide social ills is getting longer by the year; it reportedly encompasses twenty-five categories, including violent crime, drug addiction, abused children, runaway girls, dysfunctional families, increasing divorce rates, growing prostitution, rising suicides, and even slave-trading.

Kazemeini Boroujerdi protests: “the regime is adamant that either people adhere to political Islam or be jailed, exiled or killed. Its behaviour is no different from that of Osama bin Laden or Mullah Omar.” 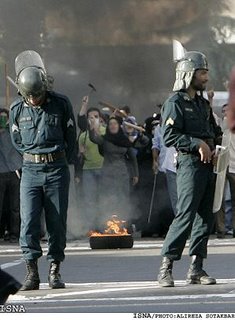 Followers of the ayatollah stand guard at his home this past weekend.

Now, the ayatollah is appealing to Pope Benedict XVI, Kofi Annan and Javier Solana for assistance. “This is not about me. It is about the freedom of worship. We hope that the international community supports Iranians’ right to follow their traditional faith. We pray for the day when the United Nations Security Council passes a resolution in support of freedom of religion in Iran.”

Ayatollah Kazemeini Boroujerdi insists that his demands are not political but rather humanitarian. “I do not wish to get involved in politics. But at a time when Iran is engulfed in so much chaos, the regime has to realise that now is not the time to create yet another crisis.”

Reuters has more on the arrest of the Ayatollah late Saturday night.