The second mass pilgrimage in a month was held this past weekend without incident of violence in Iraq.

This past weekend Iraqi security forces successfully provided security for nearly one million Shia pilgrims who thronged to Najaf, Iraq in a peaceful commemoration of the death of the first imam. The pilgrimage concluded without incident.

This was the third religious pilgrimage in three months and the second mass gathering without incident. 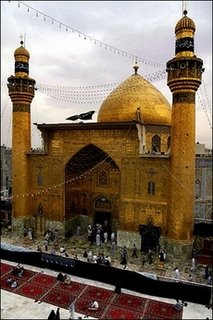 Iraqi Shiites gather outside Shiite Imam Ali’s shrine in the holy city of Najaf, central Iraq. Up to a million pilgrims descended on the Iraqi Shiite shrine city of Najaf to commemorate the martyrdom of Imam Ali, the founder of the sect, city officials said.(AFP/Qassem Zein)

The weekend events in Najaf were a huge success and went off much better than events last year:

Najaf, so often in the past the target of bomb attacks, bucked the trend with hundreds of thousands – officials thought perhaps a million – pilgrims commemorating the death of Imam Ali in relative safety.

Devotees packed the city under heavy security at the golden-domed shrine to the imam.

Carefully organised city services were ready for the massive influx from across Iraq and neighbouring Iran to funnel them to the shrine.

Pilgrims paid their respects, kissing the doorways and walls of the shrine itself, before making prayers and vows to Imam Ali.

“I am happy and stunned,” said Mohammad Jawad, a 36-year-old journalist from the southern city of Basra. “There were huge numbers of people performing their rituals without incident. I was amazed at the organisation.”

All traffic in the old city was banned, and pilgrims were ferried from outlying checkpoints to the shrine by specially marked cars to reduce the risk of car-bomb attacks.

“The ceremonies went off as planned without any incident on a security and organisational level,” said Najaf deputy governor Abdul Hussein Abtan.

“There were a million pilgrims according to the figures of the transportation people,” he added. “The popular committees did an excellent job of protecting the pilgrims and providing services.”

“Thanks be to God, I performed my rituals and the visit was perfect, unlike last year,” he said. “There (were) no problems this time around.”

In September, nearly 4 million Shia pilgrims flocked to the holy city of Karbala without incident. 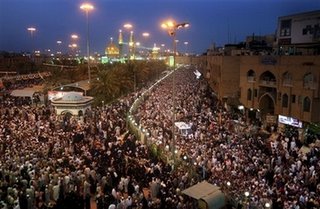 Thousands of Shiite pilgrims pray at the Holy Shrine of Imam Hussein to mark the anniversary of the birth of Shiite Imam Al-Mehdi al-Muntadhar, in Karbala, Iraq. (AP)

And, via The Electric Stove…
Crooks and Liars were surprised to hear that things in Iraq are not as bad as their media portrays it.

Somehow, the media missed this security story.
Is it too much to ask for a little balanced coverage here?