Giving up on America’s close ally, the Shah of Iran, was no walk in the park, you know!

Doesn’t he appreciate all the sacrifices Jimmy Carter made for him and his ilk?

Is there no sense of loyalty, anymore?
What has this world come to? 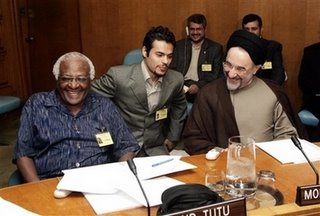 Former Iranian President Mohammad Khatami could not squeeze in Jimmy Carter into his 5-city tour this week, but had time to yuck it up with Desmond Tutu!
From the Washington Post:

Khatami, who was president for the two-term limit from 1997 to 2005, is the highest-ranking Iranian to visit Washington since the Carter administration severed ties in 1980. He is also speaking in Boston, Charlottesville, Chicago and New York on the role of the three Abrahamic faiths in the peace process. He turned down an invitation to meet with former president Jimmy Carter, partly because of scheduling conflicts, according to Iranian sources.

…In a 1998 interview with CNN, Khatami said he regretted that American feelings were “hurt” by the embassy seizure — adding that U.S. policies had also seriously hurt Iranians. “In the heat of the revolutionary fervor, things happen which cannot be fully contained or judged according to usual norms,” he said.

Nice of him to apologize for “hurting our feelings!”

Meanwhile, Governor Mitt Romney announced today that… “He would not allow any state resources to be used to protect a former Iranian president during his visit to the Boston area this weekend.”

Previously:
Jimmy Carter Taking Heat For Canoodling With Mullacracy
A Question for Khatami… Who Are You Fooling?