Iraqi-American Haider Ajina sends the following headline and article from the Iraqi newspaper Azzaman on September 23, 2006. 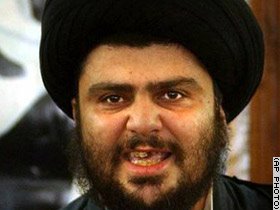 Al Sadr says that he wants to engage the Americans in a political war without bloodshed.

The Shiite radical cleric Moqtada al-Sadr seems to be willing to compromise and is urging his followers not to use force in opposing the Iraqi government and the presence of U.S. troops.

Sadr commands one of Iraq’s most powerful and lethal militias in Iraq and has so far waged two major uprisings against U.S. troops and numerous mutinies against the government.

Sadr said his call for comprise and civil resistance was for the sake of sparing Iraqi blood. But still he had harsh words for the United States.

“I do not think this new attitude will persuade America to give up its tyranny. It is an aggressor country and will remain so. And as for me there will be no letup in my opposition to the occupier,” he said.

Sadr took part in the last parliamentary elections and won 30 seats in the 275-member assembly.

His group has two ministers in the government as part of the ruling Shiite coalition.

Sadr has a large following among the Shiites in Baghdad and several other cities in southern Iraq.

“I want you to wage a peaceful war against them (Americans). I do not wish to see a single drop of blood shed because it is very dear to us. Engage them (Americans) in a popular, peaceful and political war,” he asked his followers.

However, he said Iraqis should not expect but “death and destruction” from the United States.

At last some positive news regarding the young thorn Moqtada. While still maintaining an anti USA stance, he is asking his followers not to use violence and not to spill blood, be it Iraqi or American. Moqtada’s position towards the USA is opposite that of the Iraqi government.

Since Moqtada and his party have entered, the political process (he himself holds no governmental or elected office) Moqtada has been sounding more conciliatory toward negotiations and a peaceful political process. This is a great step in the direction of sectarian peace and a national unity government.

The Sunnis, who have insisted they need protection from the “Mehdi Army”, can now drop that claim. While Moqtadas’ ideas and call are extreme and anti USA, it is easier to deal with in an environment of politics than clashing with his militia in the streets. This makes him more of an Iraqi government issue rather than a U.S. issue. His militia has protected many Shiite neighborhoods from, Baathist & Al qaida Sunni attacks and provided social services, mainly food and clothing to the young unemployed. This then proved to be a recruiting ground in a very similar fashion to Hizbulah in Lebanon. Now that Moqtada denounced violence, the next step will be, hopefully, dismantling his militia. Once that happens and the need for the services the militia provides (protection, shelter, food and clothing) are no longer needed, I see his support base dwindling as the Shiite majority begins to recognize its power and settle into a democratic government. It is early days for this young democracy we call Iraq, the small steps it is taking are definitely heading in the right direction.

Let us not forget that Iran is backing Shiites like Moqtada as well as some Sunni groups. They do this to keep our focus on Iraq and make it difficult for us to deal with the Iranian situation. It also keeps Iraq unstable so that Iraq cannot export its version of democracy to Iran.