Jimmy Carter gets rain on his parade of thugs… 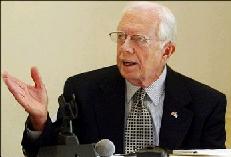 Jimmy Carter is taking heat this time for propping up another regime head in his long history of flirting with the world’s worst dictators:

Iranian journalist and analyst Amir Taheri said that a Carter-Khatami meeting would not be a bad thing.

“By begging to meet the head of one of the most repressive regimes in the world, Carter would simply show whose side he is on,” he said.

“Having refused to meet Iranian dissidents and rejected repeated calls for statements in support of Iranian trade unionists, student leaders, persecuted minorities and political prisoners, Carter is precisely the person who should hang around with people like Khatami.“

Allen Roth at One Jerusalem writes that at least one good US senator is calling for the State Department to revoke the US visa for former Iranian President Khatami, one of the terror regime’s strongmen:

In an open letter to Secretary of State Condelleza Rice, Virginia Senator George Allen courageously challenges the State Department to rescind the visa it has granted to former Iranian President Khatami.

“I question the benefit of permitting a person who headed a regime that is a leading sponsor of terrorism, permitted human rights abuses, including repression of women and religious minorities, and presided over Iran’s secret nuclear program…to travel without restriction in the United States.”

Senator Allen also notes that this action by the State Department is an affront to the Americans who are the victims of Iranian State sponsored terrorism. Then he goes on to call for actions to ban travel and other amenities enjoyed by “supporters” of this outlaw regime.

Since Jimmy Carter is hosting the former terror-regime president…
Maybe this travel ban would finally plant Jimmy back in Plains!