A Bi-partison Group of Harvard Students will hold a Protest Rally Tonight to stand up for their Iranian counterparts who have been arrested and tortured on Mr. Khatami’s orders! 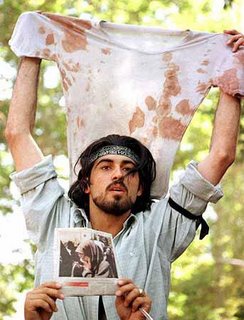 Ahmad Batebi is no Che Guevara!

His family was told that he will be held at Evin Prison for 9 more years.

He has been on a hunger strike and is in poor health since his re-arrest.

Former Iranian President Mohammed Khatami is coming to Harvard on Sunday, September 10, to lecture on “The Ethics of Tolerance in the Age of Violence.”

Yet President Khatami himself presided over a brutal crackdown against Iranian students, with security forces murdering dozens of students, maiming hundreds, and imprisoning hundreds more. Under Khatami’s rule newspapers were shut down, dissidents were silenced, and students like you were imprisoned for exercising their basic right to protest.

We will exercise our rights to do what our counterparts in Iran have
been imprisoned for: Real dialogue means holding Khatami accountable for the horrendous treatment of students that occurred under his rule. We will stand up for Civil Rights in Iran by demanding the release from imprisoned student activist Ahmed Batebi and all prisoners of conscience in Iran.

Stand in solidarity with fellow students in Iran and hold Khatami accountable for his human rights abuses:

WHO: Leading Iranain activists Ala Khaki and Lily Mazahery, representatives from the Harvard College Democrats and Republicans, and members of the Iran Freedom Concert Coalition.

WHAT: Non-violent student rally outside of the hall where Khatami is speaking.

WHY: Students in America, and around the world, have an obligation to stand up for their Iranian counterparts who have been arrested and tortured on Mr. Khatami’s orders.

BRING: Signs (both English and Farsi encouraged). Examples include:

“Promote ‘dialogue’ at home before you lecture us at Harvard”
“Release Ahmed Batebi”
“Civil Rights for All in Iran!”
Bring friends, too!

On Friday, Khatami got served over charges that he is responsible for the kidnapping and torture of missing family members of Jewish Americans who were living in Iraq during his presidency.

Update: Robert Mayer has pictures from the protest!

Jim Hoft
Jim Hoft is the founder and editor of The Gateway Pundit, one of the top conservative news outlets in America. Jim was awarded the Reed Irvine Accuracy in Media Award in 2013 and is the proud recipient of the Breitbart Award for Excellence in Online Journalism from the Americans for Prosperity Foundation in May 2016.
Hackers Break Into Alaska Voter Database - Steal Info on 100,000 Voters -- Officials Stress This Had No Effect on November Election
BREAKING: CROOKED GEORGIA ELECTIONS SUPERVISER Filmed Pulling Out Suitcases of Ballots from Beneath Table IS IDENTIFIED -- IT'S RUBY'S DAUGHTER! (Video)
BREAKING: Governor Kemp Calls on Secretary of State Raffensperger to Call for a "Signature Audit" in the State
What's Up, Ruby?... BREAKING: Crooked Operative Filmed Pulling Out Suitcases of Ballots in Georgia IS IDENTIFIED
VIDEO: The Full Six Hour Georgia Senate Oversight Committee Hearing on Democrat Voter Fraud with Witnesses and Video Evidence
See more...