Mike Wallace Kicks It With Mahmoud and the Mullahs

Mike and the Maniacs…

Brad Fisher from Clark Mountain Musings has the goods on the Mike Wallace interview with Ahmadinejad :
(in a flash presentation)

Mike and Mahmoud… Uncut!
This is Priceless!

Here are a few undoctored photos from the interview… 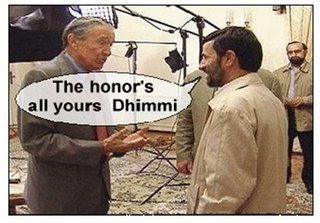 Mike Wallace came out of retirement just to interview the sociapath, Iranian President Ahmadinejad who would “Wipe Israel from the Map!”

In his interview with Mahmoud to be aired this weekend Wallace has nothing but praise for the Hezbollah supporter:

Of Ahmadinejad, Wallace said, “He’s an impressive fellow, this guy. He really is. He’s obviously smart as hell.”

Wallace said he was surprised to find that the Iranian president was still a college professor who taught a graduate-level course.

“You’ll find him an interesting man,” he said. “I expected more of a firebrand. I don’t think he has the slightest doubt about how he feels … about the American administration and the Zionist state. He comes across as more rational than I had expected.” 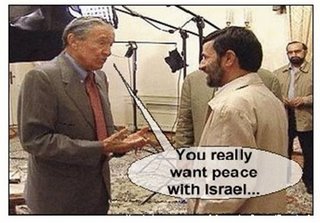 Obviously, for Mike Wallace, “genocidal tendencies” can be overlooked if you teach a night class at the community college. 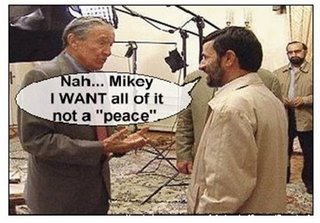 That’s where Bush lost Mike Wallace- He doesn’t have his teaching certificate!

Bob Woodward: “He is not an intellectual. He is not what I guess would be called a deep thinker. He chastised me at one point because I said people were concerned about the failure to find weapons of mass destruction. And he said, ‘Well you travel in elite circles.’ I think he feels there is an intellectual world and he has indicated he’s not a part of it.”

Wallace: “Has a disdain for it.”

Woodward confirmed: “He has expressed that. That’s right.”

Wallace chipped in: “For the intellectual world.”

Wallace would probably feel right at home with the 400 Intellectuals (including Danny Glover, Harry Belafonte, and Ramsey Clark) who signed the petition to “demand that the government of the United States respect the sovereignty of Cuba. We must prevent a new aggression at all costs.”

(This post was updated and bumped up)
Texas Rainmaker says “Here we go again.”