Although Hezbollah is a designated terror group responsible for the murder of hundreds of Americans, it did not stop supporters from rallying in front of the White House on Saturday… 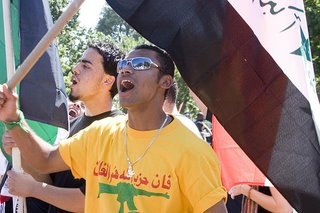 Taken at the rally for Lebanon in front of the White House. Washington, DC, August 12th, 2006. (Beth Howe)

Back from Iraq…
Former Attorney General Ramsey Clark drew cheers from the Washington crowd when he called for President Bush’s impeachment.

“War is the symptom, Capitalism is the disease, Revolution is the cure” …Right! 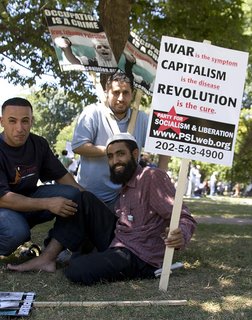 Taken at the rally for Lebanon in front of the White House. Washington, DC, August 12th, 2006. (Beth Howe)

More than a thousand residents from Michigan made the trip to Washington for the Mideast protest.

There were several bloody fists on the Palestinian flags at the protest. 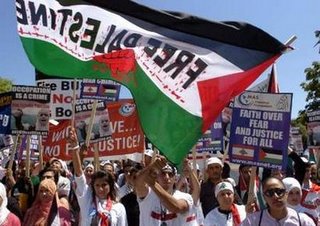 People gather in Lafayette Park near the White House to protest against the Middle East conflict, in Washington August 12, 2006. (REUTERS/Jonathan Ernst)

Hezbollah leader Hassan Nasrallah even made a showing… 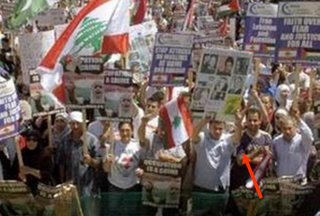 This is a zoomed in shot from a Reuters photo of the protest.

Age of Hooper has this Hezbollah sign and many more pictures from the rally in Washington on Saturday.
HotAir has much more from this protest.

Girl on the Right has pictures of Hezbollah supporters in Toronto yesterday.

And, Davids Medienkritik shows the future of Germany on parade.