A Sydney, Australia Jewish Youth Center was attacked and an attempt was made to burn it down. 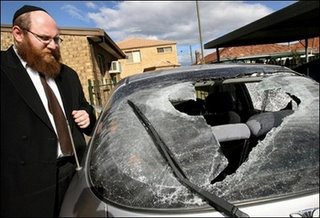 Rabbi Wernick (L), inspects one of two cars with smashed rear windows outside his Jewish synagogue in Parramatta, Western Sydney. Witnesses told police they saw a group of “Middle Eastern men” laughing and running down the street shortly after the synagogue and cars were stoned. Australian police said they had stepped up patrols of Jewish and Islamic sites, fearing racial tensions over the conflict in the Middle East had triggered the attack.(AFP/Greg Wood)

A man in Oslo, Norway, defecated on the steps of Oslo’s synagogue, then smashed two windows there. 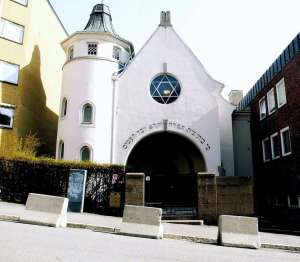 But… this whole Oslo episode was caught on security cameras!

A synagogue in a Sao Paulo, Brazil suburb was vandalized by unidentified men throwing rocks and Molotov cocktails in early August.

And, of course there was the episode in Seattle where a young Muslim man shot dead a Jewish woman at the Seattle Jewish Federation Building.

In other developments…
Vital Perspective has video of the IDF interrogation of a Hezbollah member who says he was trained in Iran.

Coalition of the Swilling has the news about the Iranian Revolutionary Guard soldiers killed in Lebanon.
The Washington Post has more.

Israel Rules takes a look at the last four weeks of fighting since the Israeli soldiers were kidnapped by Hezbollah (in a YouTube video).