November 1997: Madeleine Albright tells a group of Afghan refugee women in Pakistan, “I will never forget you… I will do everything to help you to help your country.” But, in 1998, as Taliban fundamentalist armies swarm across the Hazara tribe’s homeland in Afghanistan’s Central Highlands, Albright’s words rang increasingly hollow, hollow and false.

Hollow words did not save one Afghan woman from a public stadium execution. 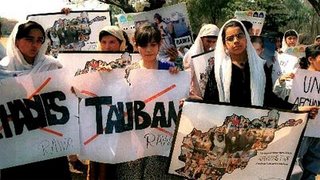 Members of RAWA protested outside the Foreign Office in Islamabad, Pakistan, while U.N. Secretary General Kofi Annan was holding talks with Pakistani officials during a two-day visit. (AP)

Before George Bush became president of the United States this is what women in Afghanistan were facing, as was aired in the movie “Beneath the Veil”:

Armed men in turbans force a woman from the truck, and make her kneel at the penalty line on the field. Confused and unable to see, the woman tries to look behind just as a rifle is pointed against the back of her head. With no fanfare whatsoever, she is shot dead. The shaky video camera captures the cheering crowd as people rise to their feet, hoping to get a better view of the corpse on the ground. The blue folds of the burqa begin to stain red with blood.

Likewise, before the War in Iraq, Saddam was filling his mass graves and keeping state hired rapists on his payroll. In those 20 years about up to 5% of the population of Iraq were killed or mysteriously disappeared.

This week, Saddam Hussein is finally going before a court to face charges of genocide against the Kurdish minority of Iraq. 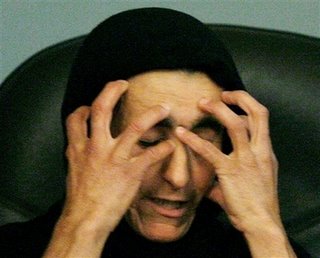 Witness Badiya Mustafa Mahmood describes the chemical attacks as she testifies to the court during day 3 of the Anfal Campaign trial in Baghdad’s heavily fortified Green Zone on Wednesday, Aug. 23, 2006. The defendants Saddam Hussein and Ali Hasan Al-Majid are charged with genocide. All the defendants are charged with war crimes related to an internal armed conflict, and with war crimes against humanity. All of the charges will relate to the lead-up to and execution of the Anfal campaign during 1987 and 1988. (AP Photo/Daniel Berehulak/pool)

Removing Saddam Hussein wasn’t just the right thing to do…
It was the moral thing to do.

But, the story is not over yet. There are still women who need help desperately. In The Australian today we read this (Via Instapundit):

IN Tehran in June, several thousand people held a peaceful demonstration calling for legal changes that would give a woman’s testimony in court equal value to a man’s. The demonstrators, most of them women, were attacked with tear gas and beaten with batons by men and women from Iran’s State Security Forces, according to Amnesty International. 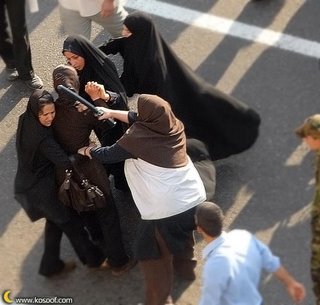 A scene from a Womens Rights March in Tehran in June.

Iranian women may not travel without their husband’s permission but they are allowed to wield a truncheon against other women.

Do you think women in Western countries marched in solidarity with the Iranian women demonstrators? Of course not. Do you think there are posters and graffiti at universities condemning the Iranian President? Of course not. You know, without needing to go there, that any graffiti at universities will be condemning George W. Bush, not Mahmoud Ahmadinejad. (I concede Bush is easier to spell.)

You know, before you get there, that at the Melbourne Writers Festival starting this weekend the principal hate figures are going to be Bush and John Howard. You know there will be many sympathetic references to David Hicks but probably none to Ashraf Kolhari, an Iranian mother of four who has been in jail for five years for allegedly having sex outside marriage and, until last week, who was under sentence of death by stoning.

Thank goddess, as they used to say: a few Western feminists have begun to wonder why women who once marched for women’s rights are marching alongside people who would take away even the most basic of those rights…

Today, 25,000,000 women are free from two of the most barbaric regimes in history thanks to George W. Bush.

In fact, there has never been another world leader who has given so many women the gift of freedom.

Hollow words are one thing. Taking action is something entirely different.
It’s about time we recognize this.

TigerHawk is right on with his assessment of the Australian article.
Liberty and Justice says that “Back in the day, womens rights activists were actually coming up for… women.”
The USS Neverdock has questions.