The mother of all midwest storms blasted St. Louis on Wednesday night. 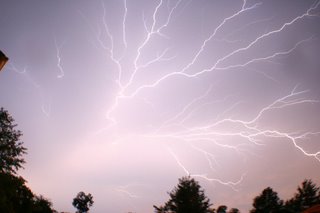 This storm photo posted by a viewer at KMOV TV is awesome but the winds last night that whacked St. Louis were devastating. Half a million without electricity and HOT!

More than half a million in the area lose power in the worst storm in Ameren Union Electric’s history:

More than 1,800 contractors and employees are working to restore power. These workers are not only from across Missouri and Illinois, but also from Indiana, Iowa, Kansas, Kentucky, Michigan and Tennessee to help restore power.

With temperatures nearing 100 degrees and humidity at 56%… it is miserable!

Here is a cellphone video from the Cardinal’s game last night. It was just crazy! But, even more crazy is that after the rain delay they resumed play!

Governor Matt Blunt (Rep.) sent in the national guard to help evacuate the city dwellers from the sweltering heat.

(Personally, my home had no damage although my tupperware shed, the “wasp magnet”, lost its roof. However, my neighbors tree was downed. And, it is so hot!… It gives me much more respect for these men and women. I am ‘borrowing’ electricity right now. Hopefully mine will be back on soon.)

Here is the curent power outage map from AmerenUE: 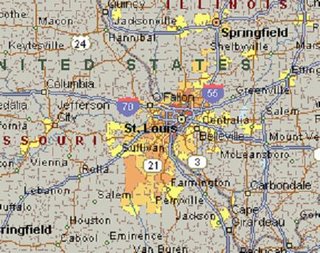 The yellow and orange areas are still without power.
As you can see the whole area is still suffering a day and a half after the violent storm.