Muthanna became the first of Iraq’s 18 provinces to have security handed over to local forces today,
Video HERE

And… the Iraqi Ambassador said to Congress today that, “The US has reason to be optimistic!”

Iraqi Prime Minister Nouri Maliki was greeted by cheering Iraqis in Muthanna Province when he came to celebrate the historic event today. 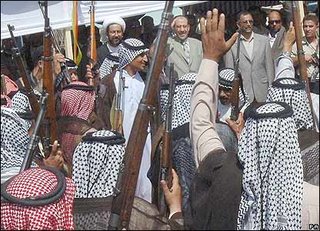 Britain handed over responsibility for security in the first of Iraq’s 18 provinces to local forces in a lavish ceremony with many local tribal leaders on hand.
Of course, there was dancing… 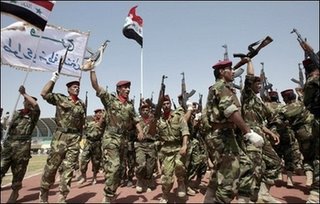 Iraqi army special forces celebrate during a handover ceremony in the southern city of Samawa. Iraq has taken charge of security in the southern province of Muthanna, replacing British and Australian forces in the first such transfer of responsibility in the country.(AFP/Ahmad Al-Rubaye)

The BBC reported… Muthanna, a sparsely populated desert area with a population of little over half a million, was chosen as the first because it has been one of the quietest areas of the country.

Prime Minister Nouri Maliki has vowed to secure Iraq from the constant onslaught of violence. 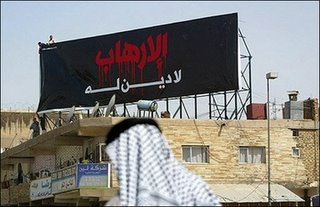 An Iraqi walks past a billboard in Baghdad that reads “terrorism has no religion”. Iraqi Prime Minister Nuri al-Maliki has vowed that the country’s security forces are capable of fending off any attempt by insurgents to take control of west Baghdad.(AFP/Sabah Arar)

Also today… US Ambassador to Iraq, Zalmay Khalilzad, told Congress that the US has reason to be optimistic:

“Americans should be strategically optimistic about Iraq, even as the continuing difficulties in Iraq will require tactical patience,” said Khalilzad, appearing before the US Senate’s Foreign Relations Committee.

The envoy hailed various “positive developments which give the Iraqi government and friends of Iraq real hope,” particularly in the political arena.

“Political progress that has been made in Iraq has created opportunities and put Iraq on the right trajectory,” he said.

Khalilzad cited a “tectonic shift” among Iraq’s Sunni community, which, after months of boycotting the postwar political process, is now actively involved.

He also noted Iraq’s successful elections and the formation of the country’s national unity government earlier this year.

It will be interesting to see how deep in the newspages this will get buried!