This pathetic Islamic thug was caught trying to sneak on a ship with women and children to get back to Great Britain! 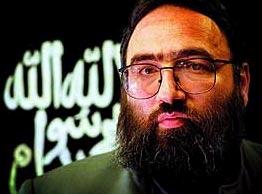 Preacher of hate, Omar Bakri, praised the 9/11 al-Qaeda terrorists as the “Magnificent 19.” After the fighting broke out in Lebanon, Bakri tried to sneak back to England:

EXILED preacher of hate Omar Bakri has begged the Royal Navy to rescue him from war-torn Beirut.

The Muslim cleric who fled Britain last year, tried to board a ship full of women and children yesterday but was turned away.

He also wrote to the British embassy asking to be allowed back on “humanitarian grounds”.

In an email to officials, dole scrounger Bakri pleaded: “The current situation in Beirut left me without any choice but to appeal to you to grant me a visit visa to see my children for one month.”

But his bid to sneak on one of our ships was blocked at harbour gates by sharp-eyed officials.

Syrian Bakri can’t return there because he faces 20 years’ jail over a coup bid.

Over 20 years in the UK, Bakri sponged £300,000 in benefits. He preached violence and praised the 9/11 al-Qaeda terrorists as the Magnificent 19.

Bakri, dubbed the Tottenham Ayatollah, was a member of al-Muhajiroun, which he left to form al-Ghuraba.

HotAir has more on the Islamothug.
Blue Crab Boulevard (Powerline blog of the week!) calls him a “Chicken of Jihad.”