Iranian rockets, via Global Security
The Fajr 5 is the one on the far right! 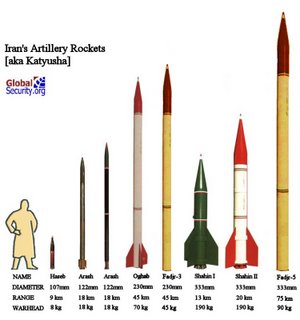 Hezbollah is helping Iran with their plan to wipe out Israel. Iran has had this plan for a while now and certainly before Ahmadinejad became president last year:

Six Shihab-3 missiles, bearing the slogans “Israel must be wiped off the map” and “We will crush America under our feet,” were the stars of the 22 September 2003 military parade in Tehran marking the anniversary of the start of the 1980-1988 Iran-Iraq war, the beginning of what Iran calls “holy defense” week. Other missiles displayed at the parade, according to state television on 22 September, were the Nazeat-6, Nazeat-10, Zezal, Maverick, Hawk, Tondar-69, Fateh-110, Scud B, SAM-6, surface-to-surface naval missiles, Fajr air-to-surface missiles, and long-range shore-to-sea missiles.

Hezbollah launched a new kind of rocket Friday that made the deepest strike into Israel yet, rattling Israelis as their warplanes and artillery targeted guerrillas in attacks on apartment buildings and roads.

The guerrillas said they used the Khaibar-1 — named after the site of a historic battle between Islam’s Prophet Muhammad and Jewish tribes in the Arabian peninsula — to strike the Israeli town of Afula.

Unlike the mainstream news, The New Editor is not fooled by Hezbollah’s media campaign.

Blue Crab Boulevard has a special soldier in Iraq’s perspective on Israel and the latest news on Hezbollah is interesting. 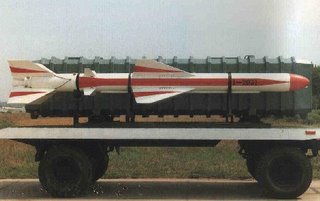 A C801 like the one shot at the Israeli ship.
Hezbollah’s Iranian C801 Missiles, Not Your Typical Terror Weapon

There was great fanfare on the radio in announcing the new firing of the long range rockets:

Hezbollah’s al-Manar radio station announced the launch with a fanfare, saying that it had fired five Khybar 1 missiles — which are named after a Jewish tribe near Medina and the battle in which they fought early followers of the Prophet Muhammad.

However, Israeli experts said that the missiles might simply have been renamed Fajers. Hezbollah has already used the Iranian-made Fajer-3 to hit Haifa, but has not yet used the longer-ranger Fajer-5.

Jim Hoft
Jim Hoft is the founder of The Gateway Pundit, one of the top conservative news outlets in America. Jim was awarded the Reed Irvine Accuracy in Media Award in 2013 and is the proud recipient of the Breitbart Award for Excellence in Online Journalism from the Americans for Prosperity Foundation in May 2016.
NY Gov. Andrew Cuomo Blames NY City Police After City Was Rocked by Another Night of Leftist Looting and Cops Were Beaten in the Street
NY Attorney General Letitia James Threatens to Sue Trump Over Possible Military Deployment to Save Looted and Destroyed New York City
"I Honor Her. She is Such a Good Human Being" - Mayor De Blasio Responds to His Daughter's Arrest at Weekend Protests
Looters Murder Retired St. Louis Police Captain at City Pawnshop - Then Loot the Store (VIDEO)
Peaceful Protester Arrested in Chicago After Filming Himself Handing Out Bombs at MN Riots and Posting on Facebook (VIDEO)
See more...