One of Jimmy Carter’s favorite Anti-American sham Human Rights groups, the UN Human Rights Council, slammed the US on its treatment of prisoners today!

** Please note- This sham group includes China, a country that sells the body organs of its political prisoners!…and Cuba… and Saudi Arabia!

Despite attempts by the world media to postulate that the the “revamped’ UN Human Rights Council is better than its discredited predecessor, the line up is essentially the same. The same old dictatorships are represented, but this time without the US, who decided not to play along.

Here’s a little background on the “revamped” council…
Kofi welcomes the Iranian guest delegate to the opening sessions of the UN Human Rights Council in June. 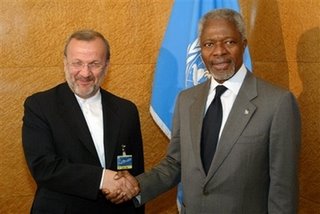 Today the immoral group lashed out at the US:

The US should immediately shut all secret detention facilities used in its campaign against terror groups, the UN Human Rights Committee has said.
The committee called on the US to give the International Red Cross prompt access to those held in such jails.

The UN report also covered the domestic human rights situation in the US.

It urged the government to ensure the rights of poor people and blacks are respected in relief efforts.

Both groups were “disadvantaged” in the wake of Hurricane Katrina, the UN committee noted. The UN panel said the US should increase its efforts “to ensure the rights of poor people and in particular African-Americans are fully taken into consideration in the reconstruction plans with regard to access to housing, education and health care”.

There should also be a moratorium on the death penalty, which appears to be imposed disproportionately on minority groups and poor people, the report concluded.

The committee’s findings came after it held a two-day hearing in Geneva last week into US compliance with the 1966 International Covenant on Civil and Political Rights.

The UN rights group is also sending a delegation to Gaza on a fact-finding mission.
That ought to be good!

The council criticized Israel for its actions in a special session on July 5, 2006.

TigerHawk has more on the UN asshats.
And, guess how the ACLU is taking this news?